Tours and Attractions in Osogbo, Nigeria

THINGS TO DO AND SEE IN Osogbo

Osun Festival
The Osun Osogbo Festival is an international favorite among visitors to Osogbo. The festival is a 700-year old tradition that is held every year for two weeks between July-August celebrating the cultural traditions of the Yoruba people. The annual processional festival reaffirms the mystic bonds between the goddess and the people of the town.

Osun Festival gives visitors an up-close & personal cultural experience by participating in ceremonies with the Yoruba people. By no means is the Osun Osogbo Festival all rooted in sacrifices; it is also a colorful celebration of cultural events with dance, food and village market.

Let us take a look at how the Osun Festival began.
Centuries ago, Olutimehin, a great hunter, led a group of settlers to escape a famine in their previous place. Afterwards, they settled on the banks of the river.

According to the story passed along to many generations, Osun appeared to Olutimehin one day. Osun, the water goddess, requested that the great hunter lead the group to higher ground which will now be known as the town of Osogbo.

Osun revealed herself to the people as the goddess of the river and the grove. In return for annual sacrifices offered in her name, the goddess vowed to protect these settlers and make their women fruitful. The settlers, indeed, kept their promise, offering annual sacrifices to the goddess. Today, it is known to be an international celebration of culture, attracting lots of people from around the world.

The Osun Festival starts with Iwopopo which is the traditional cleansing of the entire town from evil. After three days, the Ina Olujumerindinlogun, a 600-year old 16-point lamp, is lighted. After the lighting ceremony takes place, the Iboriade follows. This is an event where the crowns of all past kings (Ataojas) are assembled and blessed by the current Ataoja of Osogbo along with the Arugba (calabash carrier), Yeye Osun, and a committee of priestesses.

The Arugba is the central feature of the festival. The Arugba is a votary virgin bearing the Osun calabash on her head. This calabash contains all the sacrifice materials to worship and appease the goddess of the river. She is not just a virgin maid but also regarded as a goddess herself. People cast their problems on her and pray to her. With the calabash, she passes on to lead all people to the river. Osuntomi Oyetunji is the current Arugba. She is the young daughter of the current Ataoja of Osogbo, having taken over from Abolade Oyewale, also regarded as a goddess for 10 years.

To complete the story of the beginnings of Osun Osogbo Festival, the huge contributions of the Austrian Susanne Wenger is worth mentioning. Since the early 1950s, she had devoted her life to restoring abandoned shrines in their glorious states. These abandoned shrines were renovated and their gods remodeled in ceramics and sculpture, artfully representing more than 75 cultural gods. 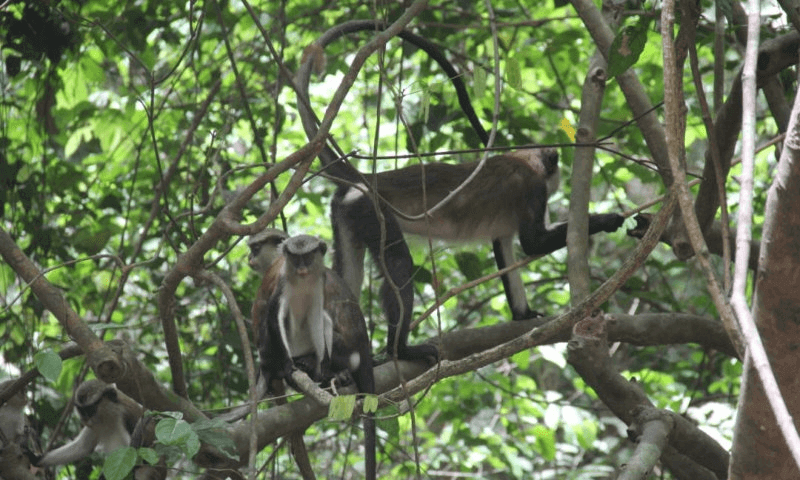 Do you want to experience an amazing blend of nature and art? Take a 2-3 hour walk through the Osun-Osogbo Sacred Grove. This sacred grove is filled with magnificent shrines, sculptures, art and friendly primates. Its lush and dense forest is one of the last remnants of the primary high forest situated on the outskirts of Osogbo.

With the meandering river running through the grove lined with shrines and sanctuaries, visitors will clearly understand why it is regarded as the abode of Osun, the goddess of fertility. To honor Osun and other dieties, artists give gifts of artworks and sculptures.

The Yoruba people places high importance on the sacred grove. It is woven into their culture and identity. New artworks are continuously installed by artists to reinforce the links between the Yoruba pantheon and the people. It is also a symbol of the identity for the wider Yoruba disapora.

Erin Ijesha Waterfalls, also known as Olumirin Waterfalls, is located on the southwestern slopes of Effon Ridge in the town of Erin-Ijesha, Osun State. 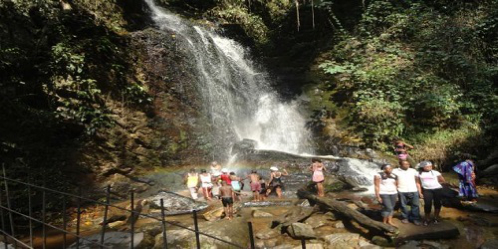 Water flows through the walls of the massive rock cleft which are usually rugged in verdant colors even though the cleft is dark both during the day and during the night. However, a good amount of sunlight penetrates to the vegetal canopies above, casting a blue-green tone, albeit subtle, upon the waterfalls.

Erin Ijesha Waterfalls has seven water cascades which provide a wondrous view for visitors, especially first-time ones. Natives believe that the waterfalls come from a big pot situated at the top of the ridge. Traditionally, counting the waterfalls should start from the top. But, since the seventh drop is the first to be encountered by visitors, it has become the first waterfall or cascade. While the cascades vary in sizes, the second one is the gigantic of all. Its waters dive down a 40-m high cliff. Visitors who are brave enough to reach the second fall can enjoy a plunge fool that forms a shallow swimming pool.

Since no clear paths nor steps have been constructed, climbing up the waterfalls can be intimidating. Tourists looking for an adventure can hold on to shrubs and branches to proceed with the climb. Through it all, the most rewarding part comes during the ascent to the enormous ridge. You get a panoramic vista of the landscape which depicts the natural beauty of the Nigeria landmass.

Other sites that you can visit include: 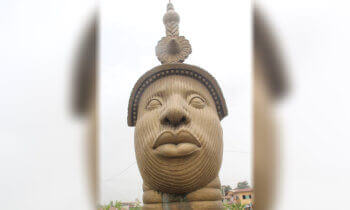 Ori Olokun The Yoruba Deity of Water Rulers of bodies of water and authority over other water deities. 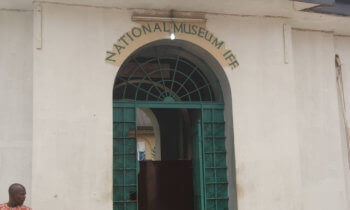 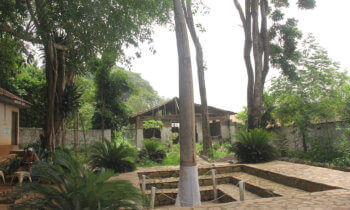 Oranmiyan Staff The prime heir of the emperor Oduduwa upon his return to claim his father’s throne. 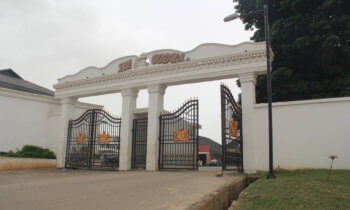 Ooni of Ife Palace (AKA) Ile Odua Palace of the traditional ruler of Ile Ife. 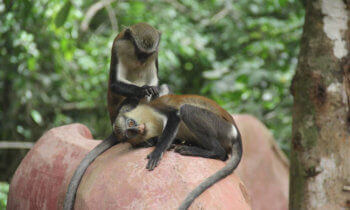 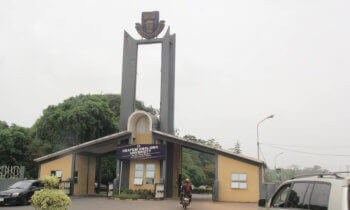 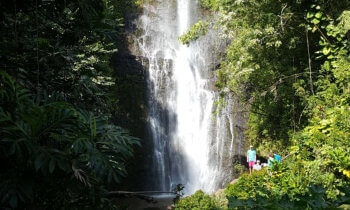 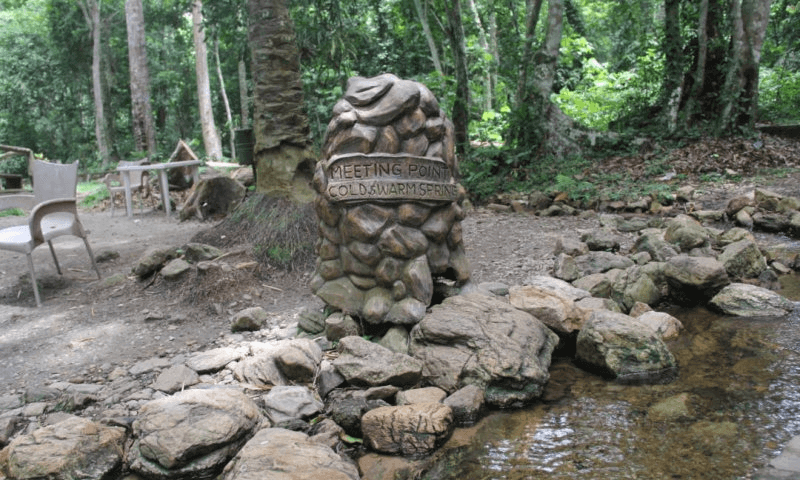 A famous tourist attraction in Ekiti State, southwestern Nigeria, the Ikogosi Warm Springs sits next to another cold spring. This is a natural phenomenon where both springs meet without affecting each other’s temperature breadth. The warm spring can get as hot as 70°C from the main source and cools down to 37°C at the confluence.

What is mysterious about the Ikogosi Warm Spring is the fact that the warm and cold spring flow side by side. There are a few legends surrounding the origin and discovery of the Warm Spring which have been passed down for generations throughout centuries.

It is believed that the water gushing out of the spring has curative and therapeutic powers.

Oluminrin Waterfalls is located at Erin-Ijesha, a town near Osogbo in Osun State. The waterfall has about seven layers and only a few visitors can climb beyond the second layer.

The breeze at the waterfall is cool and refreshing. The water flows down toward the rocks at the bottom and splashes on the vegetation at the foot of the waterfalls.

Each of the waterfall’s seven levels is unique but equally enchanting, especially for first-time visitors. Just watching, even from afar, the waters falling down from one level to the next is a cathartic experience that simply shouldn’t be missed during your trip to Nigeria. If you’re feeling adventurous, you can even climb the different levels and experience the waterfalls more closely.

The magnificent Ooni’s palace is located in Ile-Ife, the spiritual home of the Yoruba’s. Ooni is the traditional ruler of Ile-Ife and his palace is a historical monument that houses various important relics.

The Ife museum was established for the purpose of collecting and preserving various relics of antiquities that were found in Ile-Ife. The archaeological artifacts in the museum include many bronze and terracotta sculptures dating back to the 13th century.

Standing 42 feet tall, the statue of Moremi Ajasoro was unveiled in Ile-Ife and is located near the Ooni’s Palace. Ancient legends and stories have been passed down for generations about the tale of Ajasoro, a brave princess who freed the Yoruba people from slave invaders. The statue is a tribute to the heroine, reminding us of the value of a person’s freedom.

The statue was constructed on the same spot Moremi lived several centuries ago.